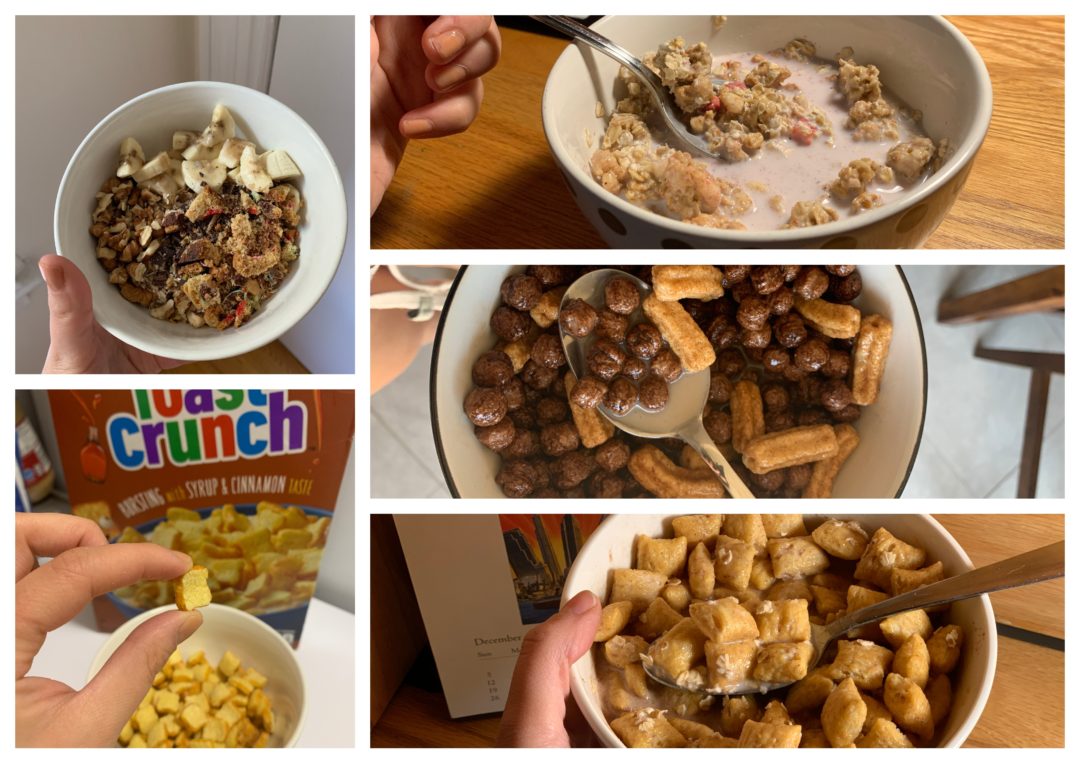 Here is the season 2 of my very important public service, the ultimate cereal guide. Here is the story of how I started with that, cutting it short for dear friends who already read the first one. I am thankful to this process which helped me discover that:

Without any more drum rolls, here is the new list:

1. Cinnamon Toast Crunch Churros: My friends Julie, Rachel and I picked this cereal for our Airbnb retreat in Joshua Tree Park (ok, I mentioned this on purpose to sound fancy) since we all loved cinnamon. I tried another version of Cinnamon Toast Crunch before but this one was absolutely amazing. Big cereal pieces have a very rich taste even if you have only one in your spoon, which makes it very calorie-efficient 😀 Also, these little churro-heads look SO ADORABLE.

2. French Toast Crunch: At some point, despite not trying all of them yet, cereal options at the supermarket started to look same to me. So I finally went online and used my Prime free shipment for the least efficient and useless order: a single box of cereal. I realized that I had ordered family size only after it was delivered, but I was happy with that later on because it was sooo good that I finished it quickly as a snack. It tastes like maple syrup and blends with oats very well. Each cereal piece looks like a slice of bread from a doll house. I still prefer cinnamon flavor more, but compared to amount and calories, the taste is outstanding.

3. Barbara’s Peanut Butter Puffins: I love puffy cereals because they fill your bowl with less calories. It doesn’t mean that they would keep you full for longer, but I often find one cup of cereal and half a cup of oats just enough for breakfast and if the bowl looks full too, then it tastes even better. Puffins is a good choice for that if you love peanut butter flavor. Just like any other product I find in Trader Joe’s, they claim to be nutritious too and I’ll just believe that.

4. Special K Cinnamon Pecan: More cinnamon? Bring it on! I didn’t try Special K so far since we have this brand in Turkey too but pecans are not abundant in our country so I wanted to give this one a try. As they claim, they do have real pecans in the box. You can even turn it into entertainment, because finding the rare and small pecan pieces resembles a treasure hunt. If you prefer a more “healthy looking” cereal, this one is a very good choice.

5. My own making: I don’t know how narcissistic it sounds to rank my own cereal mix fifth in this list, but honestly, I think overtime you learn which cereal ingredients go well together and it feels a lot healthier to prepare your own mix. I used to hate dry fruits in cereal, but I started getting used to it after trying it out with different combinations (hoping the same for cilantro).

5.1. My ideal mix is bitter chocolate, walnuts and raisins. Bitter chocolate shouldn’t be top quality, so that it is still sweet; but milk chocolate wouldn’t do either because it softens too much with the milk. Walnuts can be substituted with almond and raisins are just raisins. I love how crunchy this mix is and with a pinch of cinnamon, it tastes great.

5.2. The second best is what I call a “recycle mix”. Sometimes, I have sweet snack leftovers that are too lame to eat with coffee or tea, like remaining M&Ms from cookie batter or crushed cookie pieces. I mix them with nuts and banana or raisin, and they often give a very crunchy and tasty flavor.

5.3. Banana with oats is always tricky because if the banana is not ripe, it is a pain to finish the entire bowl. If you do have a ripe and small banana, I really like mixing it with some walnuts and cocoa. I am sure peanut butter would go well too but I prefer cocoa which has zero calories and complements banana nicely. May not worth to mention, but there should be some cinnamon. Cinnamon is always there.

6. Great Grains Cranberry Almond Crunch: As an alternative to “healthy looking” Special K, I think Great Grains does a good job. I selected this one since I never tried a cereal with cranberries and I was particularly impressed by the amount of clusters, nuts and fruits it had. You don’t have to go on a treasure hunt to find those valuable pieces as you do in Special K. I still prefer cinnamon flavored Special K over this one, simply because it has cinnamon. But I was very satisfied with the taste of this one and will try more Great Grains in the future.

7. Farmer Croc Waldbeeren: My dear friend Yahya brought his favorite cereal from Switzerland, the birth place of muesli (read more about it here). In my previous ranking, I had a conceptual dilemma with ranking granolas and cereals together, because despite being very tasty as a pro, granolas are very high in calories as a con. If I had a separate ranking for granolas, this would probably be at the top. From the moment you put milk in it, you could see the pinky purple color change. I normally don’t like dried red berry pieces, but this brand didn’t only add those pieces but also mixed some of the granola clusters with that flavor too as you see some clusters being pinky. Another good thing about it was that all the clusters were very big, which is not the case for many other granolas in the US, and worked perfectly fine as a snack too.

8. Stater Bros Cocoa Crunchies: This cereal makes me feel like a record label owner discovering a new country star. Stater Bros is a supermarket chain we shopped from during our Joshua Tree trip. I bought this cereal only because of the astronaut on the packaging and didn’t have big expectations from this super cheap private label. But honestly, it was AMAZING. It didn’t taste any different from Nesquik, my go-to cereal in Turkey which is basically a simple cocoa flavored cereal. I later mixed it with Cinnamon Toast Churros – which was a blast – since I was out of oats to take pictures. I still prefer cinnamon or peanut butter flavors more than chocolate, but the moral of this story is, be inclusive of all cereal brands and don’t discriminate based on the price tag.

9. Krave Chococale Chip Cookie Dough: I like this one more than cookie-shaped or Oreo-flavored cereals, but even for me as a sweet tooth, it was a bit too sweet. It has a small chocolate cluster at its center, which is dominated by the sugary coating anyway. It didn’t really resemble cookie dough to me either. Perhaps, they can use brown sugar to make it taste a bit like cookie batter. It may also be me not liking chocolate flavor as much as cinnamon or peanut butter when it comes to puffy cereals, so if you are a chocolate lover, give this one a go.

10. Honey Nut Cheerios: I didn’t like the peanut butter – chocolate Cheerios I tried in the previous version. A Honey Nut Cheerios fanatic recommended me to try this one too and my opinion was the same. It is not bad but because I am not a big fan of honey, the base flavor of Cheerios is just not right for me. Even though I don’t like it that much, I used to mix honey with walnuts as a kid in breakfasts, so I added a little bit of crushed walnuts. The crunchiness was amazing. As a classic, probably you should try and decide for yourself.

11. Love Crunch Chocolate Red Berries Granola: I decided to try this just to top up my Buyk basket without much expectation, because I tried similar chocolate granolas before. This one has a very elegant packaging and it tastes sweeter than Nature Lovers or Kind. The clusters were darker in color, which looked like coated with sugar. The problem was that, it was also higher in calories, so the amount that looked sufficient to me when poured in the bowl was already more than 250 kcal. If you prioritize the taste, you can consider changing your chocolate granola with this one.

11. Almond Butter Puffs: I love almonds so when I saw this for the first time in Trader Joe’s, I thought “this should be good!”. It wasn’t. Maybe because of the quinoa base, but that classical cereal flavor was missing in this one and the texture was very rigid. Not recommended.

12. Organic Coconut Almond Chia Cereal: I tried this one last year but forgot listing back then. Similar to my insticnts with Almond Butter Puffs, I thought this would be good because I liked coconut flavor. But honestly, it was just tasteless crackers, unnecessarily high in calories. Coconut was not added as a flavor but just as flakes and the cereal tasted very dull. I think modern super food like chia or quinoa shouldn’t be used for making cereals. Just let cereals be good old fashioned cereals. I mixed this with any other cereal base that I had at home back then, and it was still very unpleasant.

13. Frosted Mini Wheats Blueberry: Okay, despite knowing that these wheat squares were not my favorite type of cereal, I gave too much credit to frosting and decided to try this. It had absolutely no flavor if you don’t let them dissolve in the milk but if you do, the texture becomes very mushy. It tasted so bad and I had an entire box of it, so I thought it could be bearable if I boosted it a little. I ended up adding bitter chocolate pieces and hot chocolate powder straight in the cold milk and took the oats out of the equation since the cereal itself was already very plain. It worked fine, but still, not worth trying. I absolutely think that these wheat squares are very unnecessary. If you like them and we become friends at some point, please give me a heads up so that I don’t mention about it and we don’t go into a fight.

I spent many productive hours for writing this and you probably spent a good fifteen minutes of your time reading this too. Thanks for not leaving me alone on this. Also, I am not sponsored by Quaker Oats. 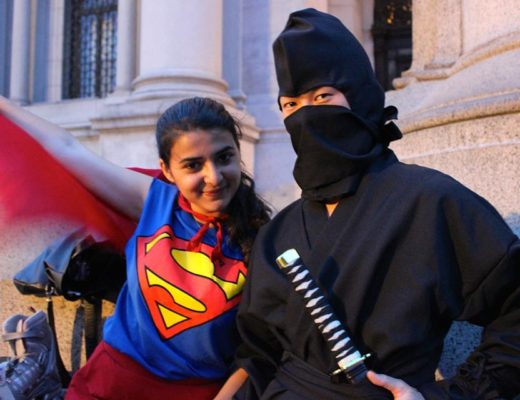 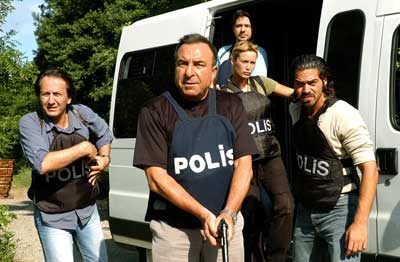 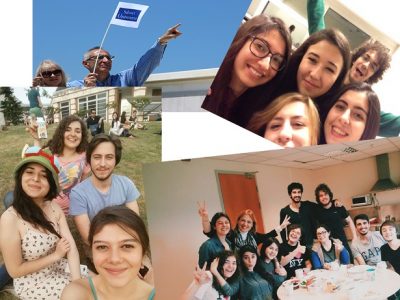